Sir Samuel Walker Griffith (1845-1920) was a Queensland politician (1872-93) who was Premier in 1883-88 and 1890-93. He was Chief Justice of the Supreme Court of Queensland (1893-1903) and of the High Court of Australia (1903-19). A liberal, and both an Imperialist and an Australian nationalist, he worked strenuously for Federation and played an important part in drafting the Constitution. Courtesy Australian Dicionary of Biography

The Australian Constitution is endorsed by the voters of each Australian colony at referendums in 1898, 1899 and 1900, passed by the British Parliament and given Royal Assent on 9 July 1900. About 45.4 per cent of electors in four colonies (Victoria, Tasmania, New South Wales and South Australia) vote at the 1898 poll, increasing to 60.71 per cent of eligible voters in all six colonies at the 1899 poll. The first draft of the Australian Constitution is usually attributed to Sir Samuel Griffith, although some argue that Griffith rewrote Andrew Inglis Clark’s version.

Section 71 of the Constitution establishes the High Court of Australia, but the first Bench appointments come with the passage of the Judiciary Act 1903. Sir Samuel Griffith, Sir Edmund Barton and Richard O’Connor are the first High Court members. 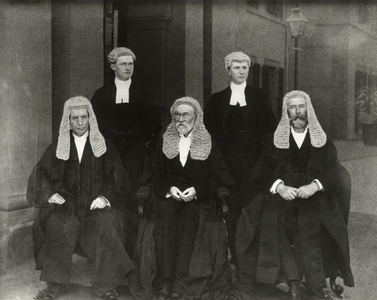