Maurice Margarot (1745-1815), a merchant sympathetic to the revolutionaries in France, urged fiscal and electoral reform, shorter parliaments and a broader franchise in Britain. Prominent at a radical convention in Edinburgh in 1793, he was convicted of sedition and transported to New South Wales where he criticised the economic power of the military officers. He was Australia’s first left-wing intellectual. 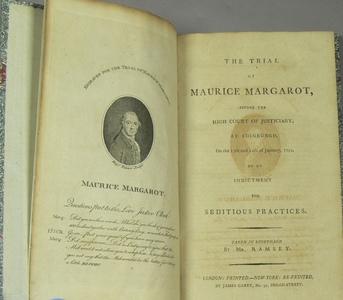 Thomas Muir, Thomas Palmer, William Skirving and Maurice Margarot are sentenced to transportation to New South Wales for their part in advocating parliamentary and constitutional reform in Britain. Their radical ideas are influenced by the French Revolution and, together with Joseph Gerrald who was transported later, they become known as the Scottish Martyrs.