Kevin Rudd (b.1957) became Australia’s 26th Prime Minister after the Australian Labor Party won the 2007 federal election. He was the first Prime Minister to be born after the Second World War. Rudd’s family were sharefarmers in Nambour, Queensland, but they fell on hard times after the death of his father when Rudd was eleven. Rudd studied Asian Studies at the Australian National University, eventually working for the Department of Foreign Affairs and later serving as Chief of Staff to Queensland Premier Wayne Goss. He was the first Labor Prime Minister to break the traditional role of the Caucus by selecting his own ministers. In February 2008, during the opening week of Australia’s 42nd Parliament, Rudd offered an historic apology to all Aboriginal people and the Stolen Generations for their profound grief, suffering and loss. Rudd resigned as prime minister and leader of the Australian Labor Party on 24 June 2010 following a leadership challenge from his deputy, Julia Gillard. On 26 June 2013 the Australian Labor Party held a ballot in which Kevin Rudd defeated Julia Gillard by 57 votes to 45 to become the new leader of the Federal Parliamentary Labor Party. Mr Rudd was sworn in as Prime Minister for the second time by the Governor-General on 27 June.

The Australian Labor Party, led by Kevin Rudd, wins the 2007 federal election and Rudd replaces John Howard as Prime Minister. The Rudd government ratifies the Kyoto Protocol on Climate Change, hosts the 2020 Summit on Australia’s future, repeals much of the Howard government’s WorkChoices legislation, and issues a national apology to the indigenous Stolen Generations. Rudd’s first term as prime minister and leader of the Australian Labor Party ends on 24 June 2010 following a leadership challenge from his deputy, Julia Gillard. He is subsequently appointed as Minister for Foreign Affairs in the Gillard government after the election of 21 August which returns a minority Labor government with the support of Independent and Greens members, producing Australia’s first hung parliament since 1940.

On 7 September 2013 Kevin Rudd is defeated as Prime Minister by the Liberal/National coalition, led by Tony Abbott, at the federal election. He retains his seat of Griffith, but stands down from the leadership of the Australian Labor Party. 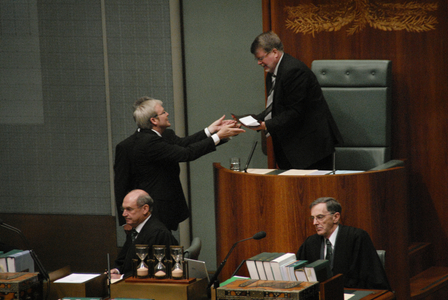