David Matthew Hicks (b.1975), after a troubled childhood in South Australia, converted to Islam and undertook military training with Al Qaeda in Afghanistan. Captured in December 2001, he was incarcerated by the Americans at Guantanamo Bay, Cuba. Many lawyers consider that he was denied due process in his 2007 trial and conviction of providing material support for terrorism. Courtesy Australian Dictionary of Biography.

David Hicks, an Australian who has undertaken combat training in Al-Qaeda-linked camps and served with the ruling Taliban regime in Afghanistan in 2001, is detained by the US Government in Guantanamo Bay until 2007, when he becomes the first person to be tried and convicted under the US Military Commissions Act of 2006. Hicks’ treatment under the newly created legal system draws widespread criticism and political controversy. 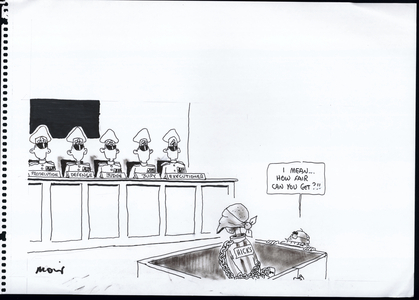 GetUp, an independent, grass-roots community advocacy organisation, is founded by Jeremy Heimans and David Madden, Australian graduates of Harvard University’s Kennedy School of Government. Its success demonstrates the increasing power of ‘e-democracy’. In its first three years, GetUp attracts over 300,000 members and its campaigns include bringing David Hicks to Australia from US detention, changing the laws on media ownership, achieving equal rights for same-sex couples, and supporting the Parliamentary Apology to the Stolen Generations. They subsequently establish Avaaz.org, a global online political community inspired by the success of GetUp and the US group MoveOn.org.