Dame Margaret Georgina Constance Guilfoyle (b.1926), an accountant, was a Victorian Liberal senator (1971-87). Minister for Education (1975) and Minister for Social Security (1975-80), she became in 1976 the first woman to hold a portfolio in federal Cabinet. Her performance as minister for finance (1980-83) won bipartisan acclaim. She values the fact that she has shown that women can take ultimate responsibility. Courtesy Australian Dictionary of Biography

Senator Margaret Guilfoyle is the first woman to be appointed to a Cabinet portfolio following her appointment as Minister for Education in the first Fraser government in 1975 and subsequently as Minister for Social Security. In 1979 she is appointed to the Order of the British Empire (Dame Commander) for her services to public and parliamentary life, and in 1980 she is appointed Finance Minister — the first female Member of Parliament in Australia to hold a major economic portfolio. 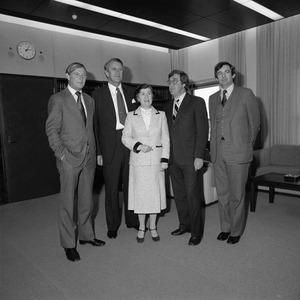